Become the Wings of Justice Reform 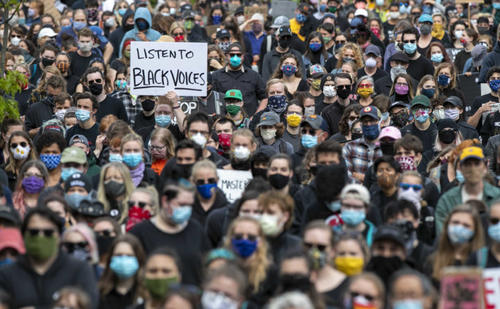 I write to express empathy and support for the Black Lives Matter movement, and all those peacefully protesting the tragic deaths of George Floyd, Ahmaud Arbery, Breonna Taylor, and sadly many others.  The violence they suffered reveals the depth of institutional racism that for centuries has plagued our nation.

For too long the knees of the powerful and wealthy have rested on the necks of minorities and our poorest.  These injustices have long been structurally protected and neglected by those in positions of power.  They have occurred with little consequence to leaders of public and private organizations, often Whites who have failed to acknowledge racist behaviors and disavowed responsibility.

Today, the cry for justice comes amid the convergence of several devastating crises that are causally intertwined.  COVID-19 has taken 110,000 lives in the nation and promises to kill thousands more. Absent the heroic behavior of our nations’ health care workers, those tirelessly laboring in hospitals and clinics, the number of deaths would be far, far higher.  Our economy has lost trillions of dollars.  Nearly 40 million in the US have lost their jobs—the source of family income, health insurance, stability, confidence, pride, and identity.

The virus clearly caused the recent global economic collapse. The disproportionate loss of health and jobs among minorities surprised many and these afflictions compound racist and discriminatory disadvantages Blacks in America have suffered for centuries.

Since these protests began, obvious unnecessary violence by police has occurred daily in US cities.  Video clips captured helmeted police lines and armored SWAT teams advancing on peaceful crowds, pushing motionless and even elderly people to the ground, cruisers driving deliberately into crowds of demonstrators some with open doors, police swinging batons on the backs of those marching, protestors locked without masks in police vans for hours on end, and the firing of rubber bullets.

Some officers were photographed pulling marchers’ masks off before spraying them in the face with disabling and toxic gases.  Other officers simply threw cans of tear gas into the midst of dense peaceful crowds.  US Attorney General William Bar, when asked about police use of tear gas and pepper-sprays responded, “These are not chemical irritants”.  Tear gas has long been classified as a “prohibited war gas” by the Geneva Protocol of 1925, a treaty ratified by the US, yet this gas is still authorized for use by U.S. law enforcement agents to quell “riots”.

Collectively, these recorded behaviors demonstrate the sorry state of our criminal justice system and failed leadership.  Police-inflicted violence has long been easily neglected by politicians, prosecutors, and police departments who look the other way rather than demanding justice, fairness, accountability, and transparency.

Given the scale of threats to human health from COVID-19, it seems important to consider current racial disparities in health loss.   Many wonder why Black communities have experienced higher COVID-19 incidence and mortality rates. One hypothesis suggests that Black vulnerability may be explained by their residence in densely populated urban communities.  This pattern itself is in part a legacy of racist and discriminatory attitudes that underlie many zoning laws that have segregated urban and suburban land uses, minority communities from Whites, and the rich from poor.

Another plausible explanation is that minorities make up a higher percentage of labor forces in service sector jobs, such as supermarkets clerks, first responders, and health care workers, that cause employees to encounter customers and co-workers face-to-face on a daily basis.

Still another cause is likely to be that poorer populations tend not to be able to afford routine medical care that can prevent minor illneses from growing into serious chronic diseases. Poorer populations are least likely to have health insurance, receive tissue testing, have contact tracing opportunities, and have isolation options.

Whites with higher incomes are normally insured, have access to routine medical care, are employed, are able to live and work in safe and clean environments, and can hire attorneys to defend themselves against violations of their rights.  Thus it is relatively easy to see how COVID-19 risks are intertwined with economic status, intensifying the suffering of Black communities.

Environmental Injustice as Another Burden

Separate Civil Rights and Environmental movements strengthened side by side during the 1960’s. Environmental activism similarly grew from a sense of injustice provoking calls for the protection of human rights to clean air, water, secure housing, healthy food, biological diversity, renewable energy and climate stability.  The field of environmental justice matured in the 1980’s, as scholars and activists focusing on the disproportionate burden borne by minorities living in areas of poor environmental quality.  This focus joined the two movements, strengthening the voices of each, by identifying the harmful environmental burdens faced by poor minority communities.

In addition to bearing the afflictions of health loss and economic collapse, poorer Black and Brown communities also have most suffered from dangerous levels of air pollution, higher toxic lead concentrations in drinking water and paints, dangerous pesticide use in public housing, and contaminated work environments without personal protective equipment.  These living conditions are often associated with low economic status, high jobless rates, unsafe housing, poorer quality health care, higher incidence of police violence, and other forms of racism and discrimination.   Today it seems we have made little progress in resolving these chronic and disabling conditions.

Dreams and Visions of What Could Be

Today the nation lies isolated and traumatized, anxious about our uncertain future, grieving epidemic loss of life and health, praying for economic recovery, yearning for a sense of community, and searching for peace of mind. These are the ingredients of devastation.

We need a dream and a vision of what our society should and could become and we need plans to get us there.   Given the disparities identified above, one guiding principle could be a guarantee that we agree to protect society’s most vulnerable populations. We have created laws to protect fetal, infant and child exposures to toxic pollutants.  This approach seems transferrable to other types of health, economic, and discriminatory contexts that define injustice.  Age, race, economic status, underlying health conditions all may be used to define vulnerable populations.

The Most Ominous Danger?

Perhaps the most ominous danger we face is the absence of national vision and leadership.  What core values and character traits do we need most to lead us to a more secure future? We need leaders who believe in racial justice, equal opportunity, nonviolent conflict resolution, and fundamental respect for human dignity. We need leaders whose integrity and honesty is beyond question; and those who strive to unify diverse and conflicting interests.  We live in a global community and we need to restore and strengthen international economic and political alliances to facilitate trade and security. We need leaders who believe in the value of science to provide the best possible intelligence and evidence to guide difficult decisions.  And we need leaders who believe in environmental justice, the fragility of the earth’s environments and resources, and the fundamental dependency of human life on global ecological diversity and climate stability.

I applaud the protesters and those struggling for an end to racism and for criminal justice reform. Activists are capturing international attention; they are energizing millions to reconsider the gulf between what is and what could be, and are encouraging all of us to become politically active. Recall that each time our nation adopted new protections of civil and human rights, it was preceded by mass protests, reminding me of Congressman John Lewis’ words:

“You cannot stand by. You cannot sit down. You got to stand up. Speak up. Speak out, and get in the way.….” – John Lewis, 1963, Student Activist.  March on Washington.

“My dear friends, your vote is precious, almost sacred. It is the most powerful, nonviolent tool we have to create a more perfect union.” John Lewis, 2012, Democratic National Convention.

The future is yours and I encourage to become the wings of justice reform.

With hope and very best wishes,

Professor of Environmental Health and Politics

Yale School of the Environment