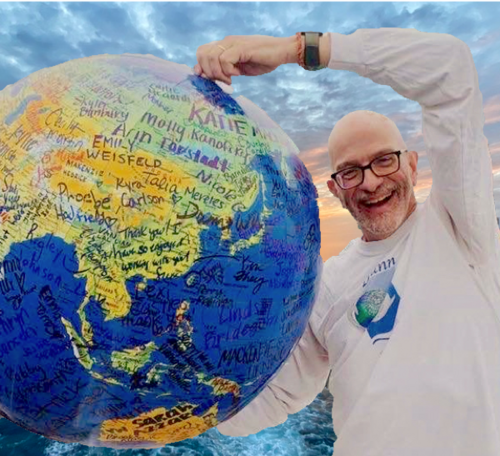 Professor Scott Denning (visiting Yale School of the Environment from Colorado State University) will be teaching EVST 394/ENV 705  Current Topics in Global Climate Change in the fall only .  His research is on the global carbon cycle, focusing on interactions between the living land surface and the atmosphere that affect CO2 and climate. He has written about 110 papers in the refereed literature, is a former Editor of the Journal of Climate, and was founding Science Chair of the North American Carbon Program.  In his course, you will learn about The Three S’s of Climate Change.

SIMPLE: How it Works

The air is selectively transparent – it lets visible light pass through unscathed but is nearly opaque to thermal infrared wavelengths. Burning carbon makes CO2 which absorbs even more outgoing thermal radiation. This progressively warms the world. It’s been easily measured and pretty well understood since the 1860s. We’re really sure about all this!

Without strong policy, we have the capacity to warm the world more in the next 200 years than it warmed over 100 centuries at the end of the last Ice Age. This would cause almost inconceivable destruction to natural ecosystems, the world economy, sociopolitical systems, and billions of people. It will get worse and worse until we stop burning carbon, & then won’t get better for centuries. The consequences of unchecked climate change are unacceptable!

SOLVABLE: What We’re Going to Do About It

Stop burning carbon! CO2 emissions are the product of (1) population, (2) GDP per capita, (3) energy intensity of GDP, and (4) carbon intensity of energy. GDP per capita is growing an order of magnitude faster than population. The fate of the world depends on collapsing energy intensity and carbon intensity even faster. We need to clean up the electricity supply and then electrify everything! The biggest challenge is balancing energy supply and demand, mostly with transmission but storage will also play a role. Nearly all the work will happen in the developing world. It will ALWAYS be urgent. Time will always be short There is no such thing as “too late” or “we’re screwed.” You really do have to solve this, so you will!

·      Learn about climate change from an internationally renowned climate scientist

·      Dig deep and understand the biggest problem of the 21st Century

From Professor Scott Denning (visiting Yale School of the Environment from Colorado State University for Fall 2021 Only):

I wanted to be an astronomer when I was a kid. After hiking the Grand Canyon one summer during college I changed my major from Physics to Geology. I published my first research article on radiometric dating of igneous rocks in northern Maine, then worked in the oil industry until it imploded in 1986. I studied effects of air pollution in an alpine watershed in Rocky Mountain National Park for 5 years before going to grad school in Atmospheric Science. I was an assistant professor at UC Santa Barbara from 1996 to 1998 then returned CSU where I’ve been on the faculty ever since.

My research is on the global carbon cycle, focusing on interactions between the living land surface and the atmosphere that affect CO2 and climate. I’ve written about 110 papers in the refereed literature, I’m a former Editor of the Journal of Climate, and was founding Science Chair of the North American Carbon Program. I’m extremely passionate about teaching and learning and spend moonless weekends at a mountain cabin photographing the cosmos.

Here’s what some previous students have said about his classes

·      This has been one of my favorite classes ever! Professor Denning was the best.

·      I loved this class and Scott Denning made it even more interesting and fun than I had ever imagined!

·      The best teacher I have ever had in my entire life! Thank you so much Scott

·      The most amazing, eye opening class I have ever taken. The spirit of the instructor and his passion towards the subject made me gain a new level of appreciation

·      As a graduating senior, this was one of the best classes I have ever taken. Amazing teacher

·      Enthusiasm for the subject is contagious