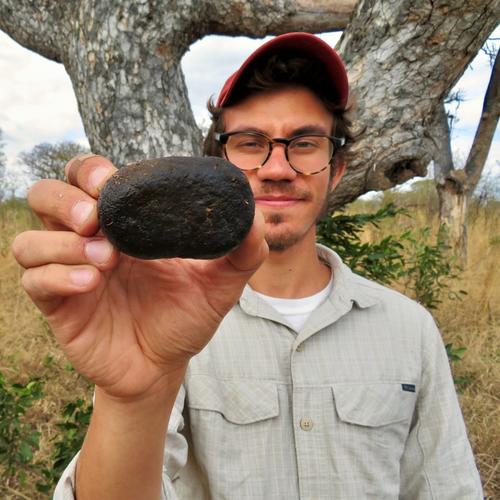 Joel received the 2018 Gaylord Donnelley Prize for his essay, which was inspired by summer research in South Africa exploring herbivore diet and landscape use in Kruger National Park during and after a severe drought. His findings have implications for herbivore responses to droughts, which are predicted to increase in their incidence in Southern Africa in response to anthropogenic global change.

He spent the past three summers in the savannas of Kruger researching the large plant-eating mammals, like zebras and elephants, that live there. He counted and identified animal dung to figure out how these animals responded to a severe drought that occurred in Kruger from 2014-2016.

African savannas are home to the world’s most abundant and diverse communities of large mammalian herbivores and droughts can induce catastrophic mortality among herbivores. Kruger, one of the largest protected areas in the world, experienced one of the most severe droughts on record in the region from 2014-2016.

His research suggests that, while herbivores can respond to drought behaviorally, their responses are constrained by their body size and feeding ecology. Conservation strategies should recognize these constraints and work to facilitate the diverse responses of herbivores to drought.

Last month, Joel received the prestigious NSF Graduate Research Fellowship and will be pursuing a PhD in Ecology & Evolutionary Biology at Princeton, in the lab of Rob Pringle, this fall.

Joel credits his mentors at Yale and in South Africa for his success, “I’ve been so privileged to have the opportunity to learn from so many wonderful researchers, both in South Africa and here at Yale, who guided me through the process of writing, submitting, revising, and publishing this research - I truly could not have done it without their amazing mentorship.”

Read more about Joel’s research on his blog post here.